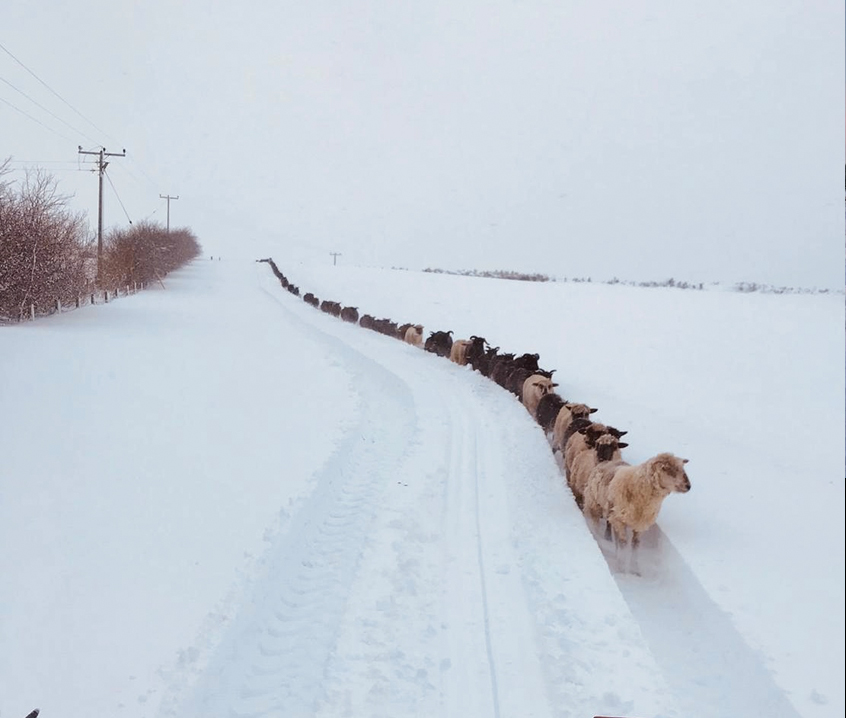 Leading the sheep to their feed earlier in the month

I have a self imposed rule of some years standing that I don't write about the weather in these monthly newsings. We'd never get to talking about much else if I didn't discipline myself. It's not an uncommon pastime, perhaps inevitably so living in a country where all the seasons often ping by us in a few short hours and the more so when a big chunk of our working life is impacted for better or for worse by it. As organic farmers our system may start with healthy soil but we are rather dependant on a fair balance of warmth, moisture and sunlight to propel things along happily from the soil onwards.

I think it was Billy Connolly who said that there is no such thing as bad weather, just the wrong clothes, but I might just break my no weather chat rule this month and say, oh my, that was a rough month for weather up on this windy hillside. A decent jacket and waterproof over-trousers as permanent fixtures atop the wellies do help but they make little impression when over a months accumulation of powder snow, having reached over half a metre depth, get whipped into a frenzy by a storm hammering up the hill from the south east.

There haven't been many occasions over the years here where the weather has felt life threatening but trying to get to the animals last Saturday in that one ticked the box. Perhaps we shouldn't have tried, but feeding and attending to our stock is core to our operation. In the end we failed to reach them all. Having taken two hours in the tractor to dig ourselves to the end of the farm road to try to reach the sheep, an immediate about turn took a further almost two hours, digging out metre by metre to get back to the buildings again. It took three more days digging and help from contractors and neighbours until we could return to some reasonable movement around the farm.

The animals are extraordinarily tough and standing gazing at the Beltie cows and calfs in the sunshine today I am amazed, and strangely humbled, by how well they look after the week they've had. We weren't however, upsettingly, without casualties; we pulled a number of buried sheep alive from drifts but we are fairly certain that there are a number of others that we couldn't locate. It's very hard. I don't think I've ever been as pleased to see a dreich, damp, snow melting morning as the one that greeted us the Sunday after that storm. Please may we have an early spring?

We are open now for February orders and the order form is updated and available on the link below. We have this month our usual range of Belted Galloway beef and Hebridean hogget. In addition we have some traditional breed pork cuts and sausages. We have a limited selection of bacon (mostly frozen), a small range of frozen Glentanar wild venison cuts along with and the usual pile of pies.

Deliveries will be heading out on Friday 26th February and we'll be open for collections on Saturday 27th (11 until 2). Before that we will be at the returned Banchory Farmers market this Saturday (20th February, 9 until 1) with a good selection of freshly baked pies and Belted Galloway beef. Unfortunately we won't have lamb for the market, only for orders next week.